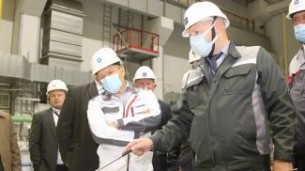 The Rosatom head was made familiar with progress of the most important stage of the startup and commissioning work – hot trials of the rector unit of the power-generating unit. He also evaluated the readiness of the startup facility and held a conference involving the customer (the state enterprise Belarusian Nuclear Power Plant) and the general contractor. Routine matters relating to the project's implementation were discussed during the conference.

Aleksei Likhachev said: “At present the second unit is 87% ready. We are routinely moving towards the end of its construction. Just like in the course of construction of the first unit we are stepping up manufacturing cooperation and the effectiveness of joint work of Russian and Belarusian specialists. The hot trials of the reactor unit will end soon. The key purpose of the hot trials is to confirm the readiness of the equipment and systems of the second unit for the physical launch, which is supposed to take place this year.”

This page is available at:
https://dyatlovo.gov.by/en/region-news-en/view/rosatom-head-visits-construction-site-of-second-unit-of-belarusian-nuclear-power-plant-15772-2021/